Spagyrics – Descendant of a mystical secret doctrine or simply a working system?

Concerning spagyrics, the European system of healing which has evolved out of alchemy, many conflicting opinions exist. It would be helpful to remember what Justus von Liebig in 1865 wrote: “The alchemy has never been anything but the chemistry; their constant confusion with the alchemy of the 16th and 17th century is the greatest injustice.”

One can say with certainty that today’s chemistry, a so-called natural science, benefitted of alchemy and its experimental methods. As a theory of nature and the interplay between man and creation, alchemy to our current thinking seems somehow strange and incomprehensible. That is why we would like to give a brief overview of the origin of spagyrics and we then focus on one of its latest developments, the cluster medicine.

The origin of spagyrics

The etymological meaning of the term spagyrics can be attributed to the two Greek words “spagein” (= separate, divorce) and “ageirein” (= merge, combine). The term was probably coined by Paracelsus (1493-1541), physician, alchemist, astrologer, mystic, lay theologian, and philosopher originating from Switzerland

Spagyrics denotes various alternative medical concepts that can be seen as a medical branch of alchemy. Spagyrics with its different systems is based on no single theoretical concept. One will find several links to alchemy, numerology, esoteric cosmology, humoral pathology, the doctrine of signatures, as well as ideas from the ancient philosophy of nature (such as the “element theory”). To this diversity and the innovative personalities who have contributed to the development of spagyrics, we owe the individual methods of spagyrics that constitute very interesting and fascinating systems until today. Their common therapeutic goal is to influence the self-healing powers of the people positively.

In the 19th century the spagyrics was reinvigorated by the Silesian railway engineer Carl Friedrich Zimpel (1801-1879). At that time he worked in the modern sense as a physician and medical practitioner in Germany. From 1868, he developed a healing system named after him (Spagyrics according to Zimpel, today Staufen-Pharma GmbH & Co. KG). He claimed distillation being the central production-step and believed to strengthen the effectivity of the remedies especially by perennial distillation operations.

The cluster medicine is another unique system, which was developed in the 1980s by the philosopher and physicist Ulrich Jürgen Heinz. It focusses on a process patented by Heinz; ionizable body-substances can render information about their condition and function, the information can be stored, too. Crystalline textures may provide information concerning the conformity of patterns in a sample to be examined with a pool of classifications grown over decades. This provides a delicate and sensitive analytics with corresponding therapeutical components. The tools of the method are:

Living systems form complex networks; via these they communicate, balance and perform metabolism. At these interfaces the decisions take place directing to one or another development, to illness or to health. Cluster medicine deals with these interfaces, which reveal the causes of complex disorders in an intelligent way. So, it was necessary to find a source of information that has this significance and depth.

The ancient hermetic statement: “Just as all things emerged from one and through consideration of a single, so are all things from this one born by modifying” showed the way in this search. The observation of blood with the help of microscopes was the crucial step of development of today’s conventional medicine several decades ago. The cluster medicine uses for its diagnosis of the human body substances, another statement of hermetics: “Separate earth from fire and fine from coarse, gently and with great caution.” This is achieved by the patented crystallization method which stores the specific information of a living being, his inner being in a crystallisate.

Most substances are crystallisable, even organic, e.g., blood, saliva, stool, etc., if previously unlocked according to defined rules. The samples thus obtained are placed on a microscope slide for a standardized drying process. A crystal texture becomes visible (Fig.1-4). With the help of powerful microscopes and specially developed software, in cluster medicine the textures of single crystallizates of a body substance are compared to the textures of medicinal plants and spagyric essences.

The expert system of the cluster medicine works with a special recognition program for patterns, which compares the characteristics of the crystallizates of a bodies substance with the textures of the existing crystallizates (Fig. 5).

These crystals database now consists of more than 150,000 crystallizates that were created and collected over decades in the fields of chemistry, physics, biology, and medicine.

The texture of the crystals obtained in this way provides very comprehensive information about the functional profile of the body with its complex connections to the psyche and spirit.

This enabled an understanding of the old doctrine of signatures, which is used by all traditional healing systems on a scientific basis. The standardized and patented pattern recognition system of the cluster medicine allows a much higher accuracy in choosing the correct remedy. This modern version of the Doctrine of Signatures, which was described by Paracelsus as a source of the highest obtainable knowledge thus provides a highly differentiated and reliable diagnosis and therapy.

The diagnostic information obtained in this way are made available to the therapist as a printed evaluation of the cluster. The evaluation includes the personal result of the test and a detailed commentary part (Fig. 6).

The statements of the cluster analysis provide accurate and comprehensive information of the patient about himself and about the causes of his illness. Here, his obvious and hidden topics are named that create problems and difficulties. The causes of people´s suffering are objectively identified (Table 1) regardless of restricted fields of vision or research criteria.

A diseased organism needs impulses that provide the impetus for self-regulation. The quality of the pulses does not depend on its intensity, but solely on the accuracy of fit. Cluster medicine is based on the administration of exactly matching information. Thus, the self-healing processes are stimulated and a better adaptation is achieved to the circumstances given. The future of medicine is, speaking from a cluster-medical point of view, not to be found in isolated influencing of diseased organisms, but in the greatest possible imitation of complex processes.

The word cluster stands for the networked interaction of individual areas of life; the cluster medicine therefore is a medicine of contexts. It is based on the parity model of reality, which states that nothing exists in isolation. All events (somatic, psychological, and mental) communicate with each other as well as the individual is in interaction with its environment.

From the perspective of cluster medicine the following fields of influences act on a person’s life and determine his health:

The in-/ sufficient adaptation to the respective influences which go beyond the normal scope of the vitality of essential importance decide about our survival or the end of our life.

The remedies of spagyrics, the Arcana shall reproduce harmony between man and the cosmic forces, the harmony between interior and exterior, between the needs of the body and the social requirements of the current time, between the short-term goals and the long-term trends that determine life on this earth. This harmony is often disturbed, especially in our time and thus, requires a regulation: A regulation that protects not only the life of one man, but saves lives on this earth on a long term basis. This holistic view is displayed in the production rules of spagyric cluster resources.

The spagyrics are made of various, mostly organically based materials. Previously, they were made mainly of vegetable, mineral and raw animal materials. Typically, in the process of manufacturing the fabrication steps of fermentation, distillation, purification, incineration and reunification are applied. The final step, also called conjugation or conjunction, is the merging of intermediates into the final product, to which special healing powers are attributed. Traditionally, these steps are carried out in harmony with certain cosmic processes, such as the position of the sun, moon and planets. In the preparation of cluster remedies in addition to the traditional extended requirements, rhythmizing steps are taken, which were gained from the knowledge of cluster medicine´s weather research.

Healing is always self-healing. Either a sick organism is able to perform correction by adjusting or changing his behavior, his mental attitude, or he uses external impulses that provide the impetus for self-healing. It does not depend on the intensity of the pulses, but their accuracy of fit.

The administration of precise information to induct self-healing is done with the use of the individual cluster agent. The healing information for spagyric distillates from plants and minerals is carried by water. For the water clusters plant communities are used that ripen in a complex five to nine-year process to become cluster spagyrics. Through their groupal growing, communicating, harvesting and fermenting the remedies are capable of promoting complex processes of life and thought (Fig. 7).

The exact composition of the water cluster is determined by pattern-matching of crystallizates of body substances with the crystallizates of the cluster essences. Cluster agents generated in this way are sprayed under the tongue at regular intervals. The healing information can be absorbed directly by the mucous membranes of the body and set in motion the healing process of regulation.

At any time, humanity is surrounded by certain attitudes, methods of thinking and working, it is subject to various requirements of the environment and society, and can take advantage of the technical possibilities of the time. Therefore, it is only logical that the spagyric methods are adapted repeatedly to the here and now. A complex age requires an adequate system of healing, individually and holistically.

From our experience, spagyrics and in particular the cluster medicine are capable of providing this to the open-minded therapists and people seeking help. 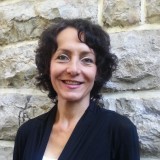 Dipl.Ing. Ludmilla Wasinger is a naturopath with own practice since 1996 and works as a cluster therapist since 1998. From 2006 onwards she started conducting seminars on cluster medicine and since 2009 she is a member of the board of the Association for the Advancement of Cluster Medicine.