The whole world is full of sound. Sounds not only surround us on the outside but they are also an elementary component of our self. Their effect influences us permanently. The ancient discipline of Nada Yoga teaches us how we can use the power of sound purposefully for our health and also teaches us that silence is the real essence of all sounds.

Nada Yoga – the yoga of sound – describes the path of contemplation through practice of conscious hearing and active confrontation with music. In the old Indian teachings, the Vedas and Upanishads, Nada Yoga is described as the most immediate path for reconnecting the human being with his divine core of being. Nada Yoga is considered to be an essential component of all yoga disciplines and is at the same time the foundation of the entire Indian music studies.

The word root “Nad“ means “sound“ and “streaming“ and is directly related with the term “Nadi“, which in Ayurvedic teaching describes the subtle energy paths of our body. Consequently, Nada is the “sound or stream of awareness“ that permeates all inner and outer worlds.

According to the old Indian teachings, the whole world has emerged from the so-called original sound – the sound of creation. This view is congruent with the findings of quantum physics that everything in the universe possesses a certain basic vibration and is in interaction with other vibration fields.

“The early findings of the yoga masters are considered proven today: vibration calls forth matter and matter is a form of vibration“. 1

The Holy Syllable OM – The Original Sound of Creation

The sounding of the OM syllable is familiar for any person practising yoga. It is considered to be a holy syllable, the first audible sound from which everything came into existence and is a symbol for the absolute, for unity itself. Chanting and meditation on this syllable is a means for liberation and self-knowledge in all yoga systems.

The Healing Power of the Voice in Nada Yoga

Beside mindful listening, in the active musical practice of Nada Yoga it is most of all the voice which is given special attention. Under the aspect that everything that is alive is vibrating it becomes obvious that diseases are disharmonies of one’s own system. By the targeted use of sound, the harmonious basic state can be re-established, and our healthy essence experiences strengthening. The voice is our first and most important instrument. By practising “Pranayama” – the mindful directing of breathing, together with the tones in connection with physical exercises from Hatha Yoga, and by the relaxed singing of simple mantras and chants the voice can unfold in a natural way. Tensions are released, and the straightening of the body is supported, which in turn leads to an enlargement of our inner resonance space.

By the sound of one’s own voice, the cells of the body are set into vibrations and the cell metabolism is stimulated. Due to the sound vibration, the cells are contacting a regulatory principle. 2

Singing as Devotion to the Divine

Music and sound are always directly connected with emotions. The person who sounds and sings does not only transfer this vibration to the complete body system but also to the environment. Singing with joy and devotion “out of the heart“ is therefore also in yoga disciplines regarded as a direct form of communication with the divine.

“The basic vibration of the heart is joy“ 3

Nada Yoga is not about musical achievements but about authentic voice expression, taking into account the entire body. Mainly mantras and kirtans are sung, simple songs and antiphonies concerned with praise and evocation of the divine. Due to the constant repeated recitation of simple texts and melodies, the spirit comes to rest quickly. Centering and inner peace are experienced.

The Inner Sound as the Aim of Nada Yoga

The ultimate aim of all yoga systems is the experience of union, the state of “samadhi”, which is at the same time understood as reunification with “Brahman“, the highest principle of creation. In the Upanishads, the heart is called the habitation of Brahman. According to yogi teaching, the link with the heart takes place via “listening to the inner sound“. It can be achieved when the spirit has become perfectly still. This practise is the deeper sense of any yoga practice.

The discovery journey into the world of outer and inner sounds, however, does not start on the yoga mat but exactly in the here and now, with each conscious breath we take, listening to the sounds of nature, with the devotedly sung song, with the perception of the present moment. Life is sound. 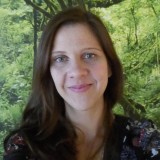 Tina Köhler studied music science at Johannes Gutenberg University at Mainz and went into education and training in the domains of music therapy, sound therapy, and psychological kinesiology, amongst others at the Peter Hess Institute in Germany and Austria. Since last year she has been living in Switzerland, conducting meditation groups; and she is the owner of the ”Seelenton“ (sound of the soul) practice for complementary methods, focusing on sound therapy, yoga, and psychological kinesiology.