Caring for the Dying in the Tibetan Buddhist Tradition

This essay is divided into three parts:
1. Death from the perspective of the Buddhist philosophy
2. The duties of a spiritual authority in Tibetan Buddhism, a lama, during the dying process
3. The duties of a lama after someone has passed away

1. Death from the perspective of the Buddhist philosophy

i) The view of impermanence: Death is part of a human’s life

The impermanence of all phenomena – mental and physical – is a central part of the Buddhist philosophy. When the right causes and conditions assemble, a phenomenon comes into being and goes on to change from moment to moment until it is destroyed or dissolves. Naturally our life force and our body also undergo this process. Death is therefore the natural consequence of getting born. Our life, which ends in death, is marked by constant physical and mental change.

This might sound grim at first, but actually has two positive aspects. First of all, impermanence gives us the chance to change difficult situations into positive ones. Also we can overcome negative character traits and develop good ones.

The second point is that our egoism naturally decreases the moment we understand that we will not live forever. Usually we do almost everything for our own benefit or the benefit of people close to us, because we think we will live forever and we need to secure the best for ourselves. The understanding how short our life is makes it easier for us to share.

ii.) The time of death is uncertain

The contemplation on impermanence of life leads us to the insight that no one knows when we will die. This increases our feeling of urgency to accomplish whatever we believe to be important without delay, because we realize we have limited time.

These are the reasons why regular meditation on impermanence is a central part of the Buddhist practice.

2) The duties of a spiritual authority in Tibetan Buddhism, a lama, during the dying process

In the Himalayan culture, usually a person who is a doctor as well as a lama accompanies the dying person in their last days. As a doctor, he will mainly treat the physical symptoms and try to restore the balance between the four elements constituting the basic building blocks of our body. As a lama, he assists the dying person spiritually. If there is no one who can fulfil both roles, of course two separate people are present.

i) The spiritual accompaniment of a dying person

The main instruction, given to the person facing death, is called To behave like a beautiful woman looking in the mirror. When someone looks into a mirror to make up, she will not apply the make up to the face in the mirror. That would be deluded behaviour. Of course her own face needs to be made up and flaws corrected. In the same way, the dying person needs to examine the kind of illusions appearing in his mind instead of reacting to them as if they were happening in the outer world; he needs to correct his own mind.

Through the gradual deterioration of the body, one loses balance, and the sense perceptions of smelling, seeing, hearing, tasting and feeling are changed drastically. This is a very painful and confusing process. That is why the lama gives this instruction To behave like a beautiful woman looking in the mirror in order to convey to the dying person what is actually happening and to tell him that what he is perceiving is just a mental apparition.

Who already has assisted someone on their deathbed, may have noticed that the dying person experiences things that were not happening at all. Someone who fought in war, for example, might be reliving these experiences and get very frightened. To behave like a beautiful woman looking in the mirror also refers to how easy it is to mistake one’s own mental images as something external to oneself and to try to manipulate them. This is very tiring and frustrating. If the dying person is reliving an upsetting episode of her life and she gets reminded that this not real, it is like waking her up from a bad dream. Then she can work on her own mental disposition and change her experience. If she believes to be in happy time in her life, then of course it is better to leave her undisturbed.

Another important process is the gradual degeneration of the elements like water, fire, earth and wind, which make up the body. Each element has a certain energy and facilitates certain functions. When this power energy decreases, the body can no longer function properly. For example, if the earth energy weakens, it becomes difficult to raise one’s head and limbs. Sometimes the dying person asks to be held for the feeling of falling down. The lama at that time has the responsibility to introduce the dying person as well as the people assisting to this dissolution process by explaining the inner and outer signs so it becomes understandable and prevents confusion.

A good example for this is a tunnel of horror in an amusement park. I went to one such in Singapore. Different figures appear, like skeletons, and it is of course very, very dark. Riding through it the first time, it is quite scary. The second ride is easier, because one knows what is going happen. The third time might even be amusing. In the same way, when the lama explains what happens during dying, the person will not be so afraid as he has already been introduced to the apparitions resulting from the changes in the body.

The mental state is not only important at the time of dying as such, but also has consequences for the future life. In Buddhism, the continuity of the mind stream is one of the core assumptions. The next life is mainly shaped by the way someone behaves in the current life, but his mental state at the moment of death is also an important factor. It has an impact of probably 20%. So it makes a lot of difference whether a person is frightened and tense or relaxed and happy at death.

ii) The role of the lama as a witness.

He is present when the dying person states her last wishes like the distribution of her possessions. Here in Germany there are laws that regulate inheritance, but in my place there are not. If no clear instructions can be found or remembered after the passing away of a person and there are different opinions amongst the beneficiaries, the lama has the authority to step in and clarify the situation. Knowing that there will be no problems after death is very consoling to the dying person and helps a peaceful passing.

3) The duties of the lama after death

If the lama has great spiritual power and a lot of love and compassion for the deceased, it is said that his prayers in the first three days will be very helpful. This includes aspiration prayers for a good rebirth as well as rituals to show him the best possible way in the intermediate state before he takes on a new body, also called bardo.

During these first three days astrological calculations are used to find out how to best dispose of the corpse – whether it is better to burn the body, bury it or offer it to wild animals. This last option is not practiced in Europe, but in the Himalayas it is quite common. If a person dies who was part of a very closely knitted family, where there is a lot of love and warmth between the members, the loss is felt deeply. The family is suddenly incomplete. In this case, astrology also helps to find the most suitable time and circumstances to carry the body out of the house. If it is known, though, that the cause of death was an infectious disease, a doctor will also advice on the disposal of the corpse.

After these three days, the body is then laid to rest according to the recommendations. Prayers for the deceased continue for 49 days after her passing away. Sometimes daily, but at least on the same weekday as the death occurred. Afterwards there is usually an annual ceremony held on the anniversary.

Directly after the passing, the possessions of the deceased are divided up according to his wishes. One part is usually used for charitable projects like building bridges and streets or as alms for the poor. If the body is burned, the ashes are often mixed with water and earth to make paste. This paste is then formed into small statues called tsatsas, which are brought to holy places in India and Nepal, like for example Bodhagaya, where the Buddha reached enlightenment. The lama also guides the family in these activities. The main aim is to benefit as many people through the body and the possessions of the deceased.

Parish St. Paul as part of the Dialogue between religions
Munich, 11.11.14

Translated from Tibetan by Daniela Hartmann
Edited by Zuzi Griffiths 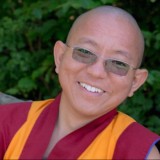 Dolpo Tulku Rinpoche was born in Dolpo/Nepal in 1982. He became a monk at the age of 9 and was recognized as the reincarnation of a great meditation master shortly thereafter. He received his monastic education under the guidance of HH Penor Rinpoche, which he completed in 2007 and now holds the status to a university professor. 2008 he returned to Dolpo after 17 years to get enthroned at his monasteries. During this trip the award-winning documentary ‘Dolpo Tulku – Return to the Himalayas’ was filmed. Rinpoche travels extensively through Asia and Europe to teach Buddhist philosophyand to raise awareness about the situation in Dolpo, which he supports through the Nepal-based Dolpo Tulku Charitable Foundation.