Paracelsus Magazin / Homeopathy / The Spirit of Homoeopathy [I]
Aug 15 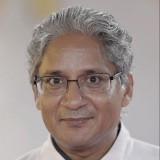