In the last 10 years, I was able to detect a strong infestation of hair follicle mites under the microscope with my rosacea patients (> 100). Due to specifically treating and strengthening the immune system of the skin, the hair follicle mites disappeared and patients regained their healthy skin. A permanent healing had taken place. Unfortunately, the relationship between hair follicle mites and rosacea is not well known. With this article, I want to help changing that, so that persons affected finally get a beautiful skin again.

Rosacea is one of the chronic skin diseases and today still regarded as being incurable. In Germany alone, four million people may be affected. The exact cause of the disease was unclear, and so far, only the symptom-causing factors such as bacteria, inflammation, stress, a disturbed immune system were treated. Hair follicle mites, which have been associated with rosacea in some publications [1, 2],  have been rarely treated therapeutically.
Mostly, the disease begins at the age of 30 and worsens with increasing age, although I often see in my practice patients in their twenties with a very severe rosacea. As with many other diseases, it can be observed that rosacea also occurs earlier.

The symptoms of rosacea show up in the face. It comes to redness of the skin, veins become visible. If the disease progresses, pimples and pustules form. The pores increase and the skin is sometimes even swollen. In these advanced forms, people are so disfigured that they hardly dare staying among human beings. They are as red as after a sunburn with pimples on their skin. Since the disease usually develops slowly over the years, the environment get “used” to these changes, but again and again, they get addressed and questioned because of their suffering. For women, the psychological aspect of not being “beautiful” usually has much worse consequences – especially at a young age.

In addition to the visible symptoms often occurs a painful burning and itching of the skin. In the worst case, there is still a proliferation of the connective tissue around the sebaceous glands, which can lead to a bulbous nose.

The previous healing strategies are limited to a reduction of the symptoms. In the case of mild ailments, antibiotic creams (metronidazole) are usually used to combat inflammation and bacteria. If the external application is no longer sufficient, usually an internal application of antibiotics follows–  classically high doses over a short period of time or in the modern way, low doses as permanent intake. Antibiotics always have side effects, and so the patient has to choose between an unattractive, unbearable skin and the side effects of antibiotics.

For the most severe skin lesions, laser treatments or surgeries are offered. The only causative therapy is the use of a very aggressive Vitamin A acid derivative. According to Wikipedia, this derivative acts as an insecticide. However, I believe that most dermatologists are unaware of the miticidal effects, but they simply use it because it leads to the improvement of the symptoms. Unfortunately, this derivative has the most extreme side effects (nosebleeds, hair loss, depression, suicidal behaviour, altered blood counts, problems with the eyes, intestinal inflammation, etc.). In my opinion, the use should be prohibited due to the disproportionate side effects.

In China, many years ago, Professor Zhao Zhongzhou recognized the very clear correlation between hair follicle mites and skin problems (rosacea, acne and seborrhoeic dermatitis). He developed a cream (DemoDerm, pharmacy), which strengthens the immune system of the skin in such away that the mites cannot survive. As a result, the skin improves.It contains an interesting combination of known substances with immune-enhancing, anti-inflammatory, circulation-promoting, disinfecting, pH and hormone-regulating properties, all of which have no side effects (including zinc, sulfur, menthol, stearic acid and salicylic acid). Crucial is the factor that it is not an anti-parasite cream, but a skin-strengthening cream that surrounds the skin’s milieu.

Conventional medicine focuses more on the treatment alleviating the symptoms and relies more on antidotes, such as anti-biotics, anti-mycotic, anti-histamine, anti-rheumatics, etc. These agents always trigger serious side effects with which the person will have to fight. This may still be tolerable in high-acute cases / indications, but it is completely counterproductive and unreasonable in the long-term treatment of chronic diseases.

We know the same procedure–i.e. the strengthening of the body’s own regulation possibilities and influencing the milieu–also from other areas of alternative medicine. The one who has a sick intestinal flora like a fungal colonization can either take an antifungal agent and thus eliminate the fungi, but he continues to have a sick intestine. Or he can use probiotics and a diet to change the milieu within the intestine in order to get permanently rid of the fungi without having to use an anti-agent, which is usually associated with unpleasant side effects.
Like that, the healing approach in Rosacea is perfectly logical if we:

What are hair follicles mites?

The genus of hair follicle mites (Demodex spec.) includes many species, of which only two occur on the human skin:

Both species have eight legs and a denture with pliers on the head. The body of Demodex folliculorum is slightly longer, that is why the two species can well be distinguished under the microscope. The mites live exclusively in the sebaceous follicles (see Fig. 2), which are not evenly spread over the body. The specific sebaceous glands are located primarily in the face, sometimes on the chest and the back, so that it can come to a severe infestation with hair follicle mites only in these parts of the body.

The hair follicle mites have a developmental cycle from the egg over the larva and the nymph to the adult mite of ten days (see Fig. 3).

The mites cause an increased blockage of the skin pores, what we call blackheads. You might get the impression that you already knew that parasites are involved here. It is interesting, that mites occur in many human beings (according to literature, every fourth), without causing complaints. One can therefore assume that they are tolerated in small numbers by humans.

The infestation with hair follicle mites leads to the symptoms in two ways:

In 1994, this relationship was confirmed, with a fivefold increase of hair follicle mites in rosacea patients compared to a healthy control group [2]. Nevertheless, these findings have not yet been incorporated into the treatment.

The influence of hormones and immune system

Certainly, the general health situation, the immune system and the hormonal starting position play a decisive role in any form of infestation with hair follicle mites. Especially in the menopause one observes an increased occurrence of rosacea diseases. However, this does not mean that hormones cause rosacea, but only that both aspects are socialized and that the hormone conversion favours the infestation with Demodex parasites. If you remove the mites, usually the “hormonal rosacea” disappears.

In general, we have less hormones and a weaker immune system in old age, and this explains why rosacea is more common at a later age, because hair follicles can spread more easily on weakened skin.

Hair follicle mites are relatively easy to detect under the microscope. The optical evidence is important, because if the affected person sees the mites with his own eyes, then he is 100% willing to make a change of the skin environment.

Without this key experience, the patient is rarely ready for a therapy. As a rule, the patients have several years of suffering, various dermatologists and many unsuccessful attempts with various skin creams behind. No patient believes any more that his complaints will simply disappear with a “miracle cream”. However, if the patient has seen the moving mites under the microscope, he wants an immediate change. Most disgusted by the tiny animals, he wants to get rid of them as quickly as possible and sustainably.

Now that the cause of the condition is understood and the patient is willing to change the skin milieu and to strengthen the immune system of the skin, the basis for a successful therapy is given.

For the proof, we need a microscope with 40- or 100-fold amplification, a slide, kitchen oil and a blunt “spatula” (it can also be a normal, not too sharp knife).

Additionally the sebum comes out of the skin pores of the affected person The easiest way to get a sebum sample from the skin pores is around the nose. Even if the skin of the nose is not or only slightly affected, the mites are usually in great number there. With open, wide pores, the removal of sufficient sebum is very easy, with narrow pores, it is sometimes very difficult. The amount is important. If not enough sebum has been taken, the detection can fail, although the patient suffers from severe mite infestation. The sebum is removed from the skin with the spatula and mixed with a drop of oil on the slide. Together with the sebum, the hair follicles have come out of the pore and are now swimming in the oil.

The slide is placed under the microscope without coverslip, the mites are searched. At first sight, with 40x magnification, the mites can still resemble skin particles, so that a beginner often cannot be sure what he sees. Therefore, magnification is displayed at 100x or even 400x. Then you can distinguish the mites very clearly from all other skin residues (see Fig. 4).

Although the relationship between rosacea and hair follicle mites has been documented in literature [1, 2], it is barely considered in the treatment of rosacea and other forms of acne. I can say from more than ten years of experience with rosacea patients that I was able to prove the existence of the mites under the microscope in all cases. More important than the detection of the mites, however, is the success of the treatment and thus the confirmation of the connection in the pathogenesis.
Alone with the simple but effective strengthening of the skin and the associated elimination of hair follicle mites, a healthy skin could be achieved again, the documentation from the practice clearly demonstrates this.

Fig. 5: The patient from Fig. 1 after a treatment of two months 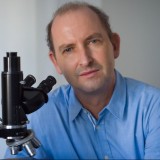 Dominik Golenhofen is a naturopath and has been working for 19 years in his own healing practice. At the beginning in Stuttgart, now in Ljubljana (Slovenia). He specializes in the detoxification of heavy metals and developed the ToxTest (www.toxtest.de) for the detection of heavy metal contamination. At www.demodex.de you can read about his findings on hair follicle mites in rosacea, acne and seborrheic dermatitis.