Messages from a doctor in the fourth dimension [II]

The relationship between life on earth and the world beyond. The role of the spirit entity

Today I would like to speak about the relationship of the soul and spirit to the other world, the world beyond, or, as mankind sometimes calls it, the fourth dimension. I deliberately speak only of soul and spirit because the body is material and has no connection whatsoever with the other world. Like everything material, the body is mortal and ephemeral. But even this is a temporal interpretation because in point of fact nothing is ephemeral; it merely takes on another form in the course of time. However, for the understanding of this world, ephemeral is that which loses its original form; in the case of the earthly body it is the ability to perform its inherent and appointed service.

The soul and spirit are immortal. In fact, man says of somebody who has died that he has „given up the ghost“, although he only means that he no longer has the ability to be intellectually active and use his five senses. The soul also disappears. It is not easy for man to keep soul and spirit apart, since both are invisible and can never be physically grasped.

The ability to perceive and control one’s body is generally considered to be in the brain. This is understandable if the reference is to intelligence and man’s need to understand his surroundings so he can think, work and so on. But I do not mean this intellect. I refer to the spirit entity which is in every human. It is situated not only in the brain, but in the entire body and merely uses the brain to be able to be active and give expression to its will.

This spirit entity is not directly connected to sections of the body, but is embedded in the soul. If we envisage a nut, there is first of all the soft kernel which contains life, durability, reproduction and everything else necessary to ensure continued development. This tender, valuable kernel is enveloped in a delicate cover, the soul. The soul also fills the whole body and is comparable to the fine membrane around the nut’s kernel, protecting it from the shell. The soul takes care – or should take care – that the spirit entity’s development is guarded and preserved. It should give the spirit entity the protection it needs to be free and untrammelled in its work. Finally, the nut’s rough, hard shell can be compared to the body, which offers accommodation to the soul and the spirit. It is not always very comfortable and pleasant, but for the time that soul and spirit have to inhabit it, this body is equipped in accordance with all the norms and laws of nature.

This is a brief review that has little to do with medicine and its science, but it is necessary to understand the fundamental truths since everything else will be based on them.

As I have said, the spirit is the precious kernel, the soul its covering or garment. The spirit or spirit entity is the individual’s personality; it directs and guides everything. It is the activating influence that sparks the manifestation of life through personal free will. I cannot explain the manner in which contact with the soul is established because the necessary vocabulary does not exist in human language. The spirit entity is not tangible in the material sense, but is recognisable by its activity. Human beings call spirit those signs of life produced by the spirit entity which exist in the use of the five human senses. A person is spirited when he can use his spirit for great tasks; when he is capable of great achievements, not physical achievements, but those which necessitate a more elevated manner of thinking.

A person is feeble-minded when he is not capable of using his senses, or only one of them, correctly; when he is not capable of thinking accurately, whereby accurate is accepted as being what the majority of people in a similar stage of development are able to accomplish. I do not wish to prolong this argument, but only want to make clear that the spirit entity and spirit activity are not the same. Nevertheless spirit activity is the expression of the spirit entity, which strives to higher development and must do so.

When spirit activity ceases for earthly man, the spirit entity does not cease to exist. It is indestructible and not disposed of by mortal death, which only affects the body. On the contrary, it is reborn.

For the spirit entity the essential life is the one beyond the grave. Birth into earthly life is death for the space of time it has to dwell in the material body. Earthly death is the birth or resurrection to an ever higher life in the world beyond, because no spirit entity, unless it is totally underdeveloped, goes downhill in its evolution. There is only one way – and that is upwards. It is an endlessly long and laborious way, but the knowledge that the tendency is ascendant encourages every spirit entity to strive towards the goal set for it.

I have purposely deviated somewhat from the subject in order to clarify the concept of spirit and to underline that what the material world calls spirit is only the manifestation of the spirit entity. The material scientist cannot understand or explain this.

Exact science still resists this theory, but it cannot deny spirit powers. Nor can it explain how these powers manifest and cease.

A person’s spirit exists and manifests according to the degree of development shown by his life’s expressions and deeds.

There has been considerable racking of brains to try and understand how a person who grows up in totally inferior surroundings, and has not been influenced in any visible or ascertainable manner, is capable of exceptional achievements.

It is a fact that in every child born, a more – or less – mature spirit is incarnated. I am tempted to say that incarnation can almost be likened to internment in the material sense, because at the moment of birth the spirit loses every conscious contact with the world beyond. Its recollections of the other-worldly life are erased; it must begin anew to learn and develop. Nevertheless, what was learned and achieved in a previous life and in the school of the world beyond is not lost. These experiences and this knowledge, as well as the stage of development already acquired for what is good and valuable, shows plainly in its way of life, so that when it ends its earthly life it can return to its home in the spheres where it is able to progress further along the steep path to the summit.

This is why children show such dissimilar development, why it is often a waste of time for parents to try and pattern their child’s development on their own. When a child does have to follow its parents’ guidelines it is because it has been predetermined which fundamentals and possibilities, and also which difficulties, must be prepared for this child along life’s way so it can make good past mistakes or, if it has reached a higher stage of development, so it can progress accordingly.

I am convinced that many readers doubt what I have written, or do not wish to accept it, because exact proof is lacking and much of what I write contradicts the theory of heredity, like talents inherited from parents and so on.

But in the course of my messages we will see that on many points these theories are in accordance with reality, even it they do not measure up completely. 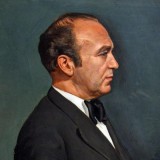 Dr. Karl Nowotny was born on 26th February, 1895, in Vienna.In 1914 he began his medical studies at the University of Vienna and after graduating joined the University Clinic for Neurology and Psychiatry with the rank of Assistant Professor. In 1945, Dr. Nowotny took over the management of the Vienna City Mental Home, „Maria Theresien Schloessl“, and ran it until he was pensioned in 1963. From 1946, he lectured in neurology and psychiatry at the University. Over the years Dr. Nowotny published a great many scientific papers. One that merits particular mention on account of his psychic messages is the „Handbook of Individual Psychology – The Technique of Individual Psychological Treatment“. Dr. Nowotny was a well-known personality in the field of individual psychology. He was co-founder of the „International Association for Individual Psychology Vienna“, and for years on the Board of Governors of the „Austrian Society for Psychic Hygiene“. His lectures at the adult evening classes aroused keen interest. In 1960, Dr. Nowotny was awarded the Golden Badge of Honour for outstanding services to the Austrian Republic. On 18th April, 1965, he left the material world ... but a few months later was united with us once again through these psychic messages.